“The only way to create change is to be engaged.” 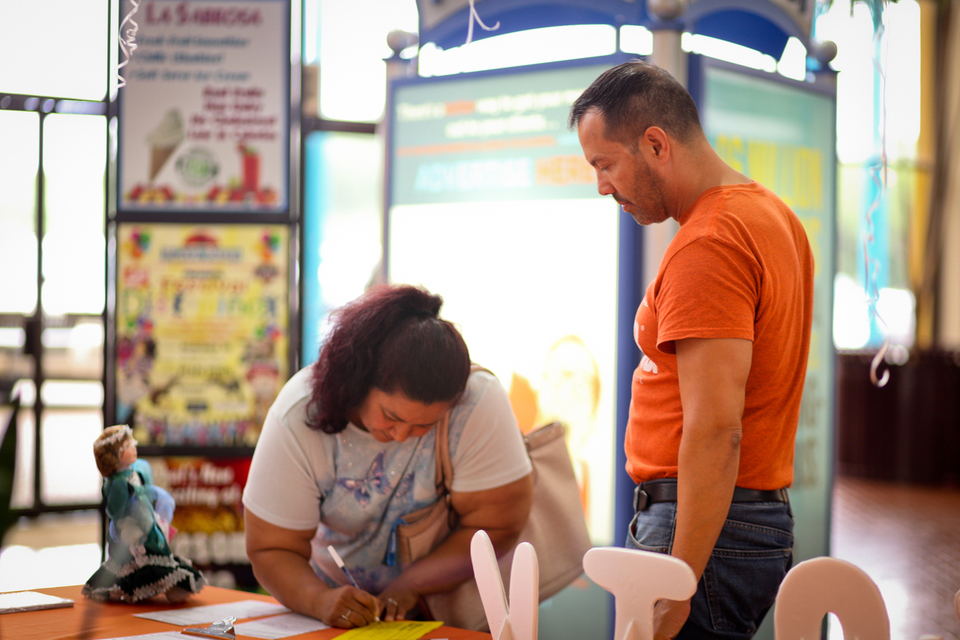 BakerRipley’s Community Engagement team is devoted to showing people the value of their voice. We’ve seen measurable, positive impacts in Houston communities because neighbors realized their vision for their neighborhoods and learned how to make that happen.

Navigating the local government policies and processes can be daunting, and often people are overwhelmed or just not sure where to start when they have an idea or an issue.

Our programs are instrumental in teaching people how to bring about productive change. “For us, it’s not just about ‘complaining’ it’s about creating solutions and be a part of the process to actually resolve it.” Director of Community Engagement, Graci Garces, explains.

What does that look like? Graci identifies three clear ways to have an active say in decisions that impact your community:

Voting and encouraging others to vote

The Community Engagement team reached out to more than 20,000 voters before Election Day. With more than 180 volunteers, the team provided information on early voting and polling information.

From knocking on doors to making phones calls, or showing up at events and asking candidates intentional questions, people can participate even if you aren’t able to cast a ballot.

“One of the most impactful things about this [2018] midterm election was the voter turnout – it was incredible,” Graci said. “True democracy is not defined by political parties or candidates – it is achieved when everyone is engaged during and after elections.”

Holding representatives and ourselves accountable

Most important thing: Show up.

If an elected official or community member hosts an event or there’s a public meeting with an agenda item you care about – show up.

“It’s important for neighbors to show up, so elected officials get as much information and feedback from their constituents as possible to inform the decisions they make,” Graci said.

If there isn’t an event being hosted or organized by a community leader or representative, there are ways for you to start or ignite some discussion around an issue affecting your community.

BakerRipley’s Community Engineers program teaches neighbors the value of their voice and how to develop their vision for their communities. They start by researching their representatives, especially at all local levels. Then, they write a vision statement that helps guide their plan.

“When the community engineers raise a concern, they practice asking intentional questions and addressing a specific issue. Then, they need to show what they are willing to do and make a strong, specific ask as a compelling solution,” Graci said.

We’ve seen this happen in the East End, where the community engineers were concerned about the overpopulation of stray animals in their neighborhood. They reached out to their elected officials and worked to bring Emancipet to the East End.

In Gulfton, a group of teens wanted to build a skate park in their neighborhood. Working with our community engineers, the teens opened the skate park with the help of the City of Houston, Council Member Mike Laster, the Houston Parks and Recreation department, and the Tony Hawk Foundation.

In East Aldine, we have a group of engineers working with the East Aldine Management District to connect community leaders and business leaders, fostering a mutual respect and identifying opportunities for economic development with the needs of the community.

Volunteering and putting hours back into the community

“Even if you’re not trying to create a change in terms of policy or infrastructure for a community, you can continue to understand the value you posses by putting in hours towards your community,” Graci said.

Volunteering gives you a way to be involved and present, making a routine of showing up that comes easy when elections do roll around again.

“Whether it be here at BakerRipley, through our Tax Centers or immigration forums, or with any of our other partner organizations, we encourage people to stay engaged, cultivating a year-round involvement with local organizations they are passionate about.”

Municipal elections happen in both Houston and Pasadena in the next two years.

“Local governments arguably have a bigger impact on local residents with their day-to-day lives,” Graci said. “Municipal elections are non-partisan, they don’t run on party tickets.”

With an increased voter turnout in the last election, Graci and her team hope to build upon that momentum in 2019.

“The only way to create change is to be engaged.”