Juan Dunn’s original letter to Council Member Mike Laster explaining the importance of having a skate park in his community. Juan Dunn is part of a group of skaters who reached out to the Council member who connected them to BakerRipley for mentorship. 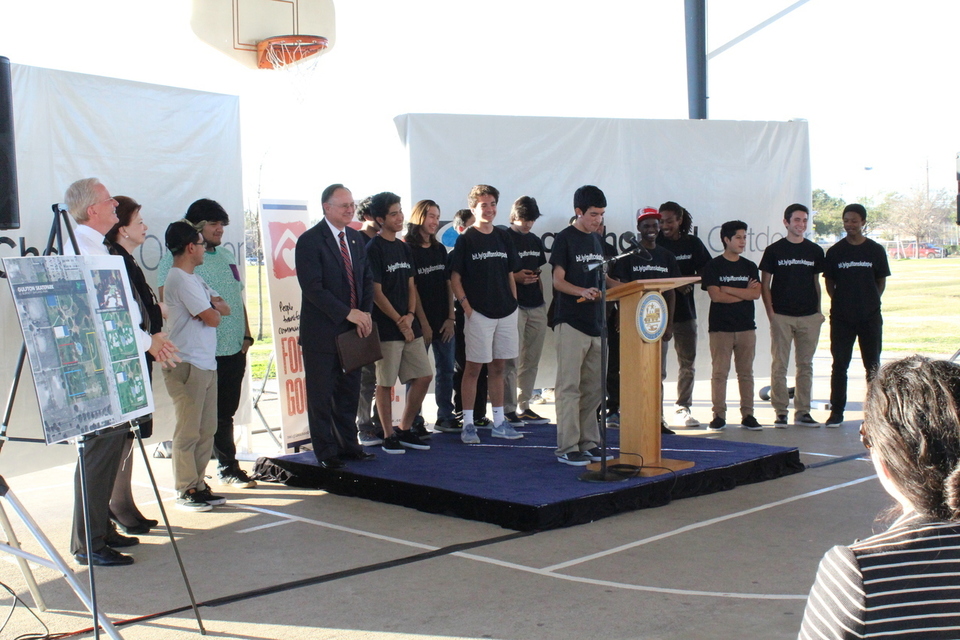 My name is Juan Dunn and I’m one of the neighborhood’s local skaters. To me skateboarding is the best sport that anyone can learn to do. It has given me the opportunity to meet a diverse set of people, whom I am honored to call my friends. They have taught me one of the greatest things of all and that is to accept people for who they are. Not only does skateboarding teach you acceptance of others, but many other life lessons as well.

Something’s you might learn from skating is that it takes courage and you have to take risks; “Will I land or fall on this gap?”

Patience and persistence: “No matter how many tries it takes, I’m going to continue to endure the pain until I land it.”

Sportsmanship: You landed your trick so we high five, or you might be having some trouble so I might give you a few motivating words like, “Yo, you’re so close. You got it!”

People tend not to take me seriously when I say skateboarding is my dream or my future career and I wonder why can’t something that brings me happiness be a serious consideration for my future? There’s no limit to what you can be in the world, I know anything is possible because that’s what I was taught to believe.

The first memories of skateboarding in my hometown, Los Angeles, California, gave me a feeling as if it was meant to be or that skateboarding was a part of me. I remember when I was younger there were a few videogames and TV shows that really inspired me to skateboard such as “Tony Hawk’s American Wasteland” and “Rocket Power”. I told my mom about my new-found love and weeks later she told her friend whom was kind enough to give me a used mini-board and I was extremely excited to get started.

When I moved to Houston in 2008, I was fortunate enough to meet my childhood friends Donny Som, Tony Bun, and Deandre Daniels. I remember the first few times we hung out I was afraid of them because they were about two years older and two feet taller than me but despite that and our backgrounds, we grew and progressed together through skating. They pushed me to try my hardest and try new things; we also spent a lot of time having fun filming videos of us skateboarding and goofing around.

These three friends are my brothas from otha mothas! Donny and Tony are one in the same, they may be cousins but they’re as close as brothers. They taught me to not care what others think of me and how to better stand up for myself. Deandre is one of the most inspiring. People always question the black skater like there’s something wrong with that. Dre is one of the most determined skaters I’ve ever met and if you didn’t know him before this then you do now, one of the best locals hands down. No matter who you are, what you look like, or where you came from, you CAN be great! Together we’re just four kids living in what some may describe as a “bad neighborhood”, hoping for a better future, continuing our life of skateboarding and meeting new friends just like us, making each other better.

After several years of skating in the Southwest Houston community, meeting many new skaters, and traveling to many different skate parks with my friends I realized that there wasn’t much within our neighborhood for us to legally skate. We have been thrown out of parking lots with concrete spaces and private businesses with stair sets and gaps where we go to practice a sport in which the space was not meant to accommodate. Our most cherished spot, an abandoned gas station, that had small and few obstacles that was just minutes away from all of us along with all the memories we made there has recently become nothing but a field of dirt and grass.

We are your future and we want our voices to be heard. We want to be productive, we want to be good citizens, we want to be healthy, and we need your help! Over 100 skaters in the Southwest Houston community are constantly looking for “illegal” venues to practice the sport. We personally know over 50 skaters that have to plan ahead in order for their parents to drive them across town to practice their passion. This makes me wonder, what happens to the kids that are not able to drive around town? Is their interest still growing? What would I do if I was not able to skate?

Without skateboarding, who knows what kind of people would be influencing me. I spend most of my time at school and a majority of the people at my school are into partying or shooting dice and those are definitely not the type people I would like to be apart of. Skaters are stereotyped as rebellious, idiotic, and ignorant to anything outside of skateboarding. There are even some parents who wouldn’t dare allow their child to skate. Some are afraid their children may become one of these people many skaters have been stereotyped as. A lot of people think I’m some poor kid cause of my torn clothes and shoes but it is just part of the skater lifestyle and has nothing to do with our economic class.

Imagine a skate park within our neighborhood, giving many kids a place to skate and practice their love of skateboarding with people who share the same interest without having to travel a long distance or be negatively influenced and just have fun.

This imagination will become a reality thanks to council member Mike Laster who has been working non-stop to fund this incredible project. Our total funds have reached SIX-HUNDRED AND TEN THOUSAND, well past our minimal goal of 500k. We, the youth, have been engaged with the program and have been looking for new way to raise even more money. Clear Channel Communications has been a great help as well with providing us with a few billboards around town. In a neighborhood with nothing but hopes and dreams we are truly thankful for the amazing and helpful supporters. We are all eager to see, and even more excited to skate at our new skate park. This is just the beginning of something great!