“This was one of my dreams and I was able to do it because of BakerRipley and its supporters." - Irene Rodriguez 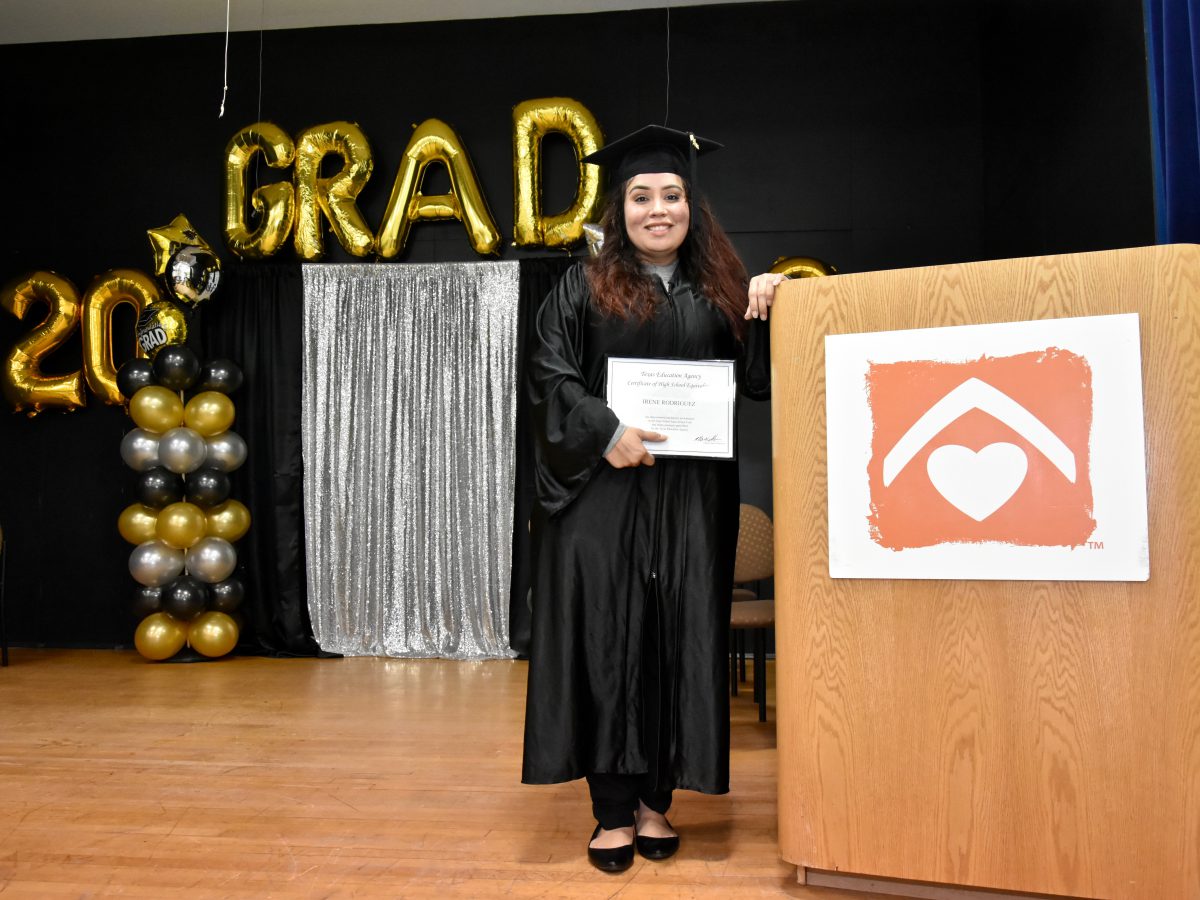 Not completing High School bothered Irene Rodriguez and her goal was to get a diploma by the time she turned 30.

“I had a baby after my junior year, but didn’t have anyone to watch him so I had to leave school. It was a huge decision that I regret, but I never forgot about finishing,” says Irene.

After a few attempts and a lot of dedication, Irene graduated in December 2018, the first graduate of our GED program in the new BakerRipley East Aldine Campus.

This was Irene’s third attempt for the GED – something always seemed to get in the way.

First time around she got really sick. The second time her husband switched jobs and their new schedules didn’t allow her to complete the course.

“This time, I promised myself I will continue no matter what happens. I did things backwards, but you should never give up on your dreams,” exclaims Irene.

Irene’s mom told her about the GED program and offered to watch her kids. With the support of her entire family, Irene enrolled in the two month course

Even when she thought everything was set, an unexpected challenge almost stops her from completing the program.

“I have Rosacea and I got it really bad my last four weeks here and I didn’t want to be around people or come to school. I was so embarrassed, it was really, really bad,” explains Irene.

She was prescribed new medicine to control it and one of the side effects was depression, something she wasn’t aware of. She started feeling a little weird but went back to school after a few days.

The final two weeks were a constant struggle. Irene pulled through with help from her mom and made it to the final week. She passed the final test with no problem and after that everything seemed to go way.

“What was I going to tell my kids? I tell them now, when you start something you finish it and it was my turn to take that advice,” says Irene.

“The instructor, Mr. Gomez was great!  He was always available to help us and I could go talk to him one-on-one. Before I was going to another place and the teacher was there in case you needed help, but it was almost self-taught. When I came here I saw the difference. He wrote on the board and broke down every single step,” says Irene.

Another thing that helps is that the course is free, except for a the test fee.

“There wasn’t something like this growing up. At other colleges they charge for GED courses, but here it was free and it’s very beneficial for somebody that doesn’t have the means to pay $250 for six weeks.”

Irene is now encouraging her mom to enroll and get her GED too.

“I told her you have take the class with Mr. Gomez, he’s a great teacher. And she’s going to do it, she said I inspired her.  We started the process together but then she stopped so she could watch my kids.”

Irene hopes these types of programs continue to help communities around Houston.

“This was one of my dreams and I was able to do it because of BakerRipley and its supporters. As long is this continues people will be able to make their dreams a reality.”