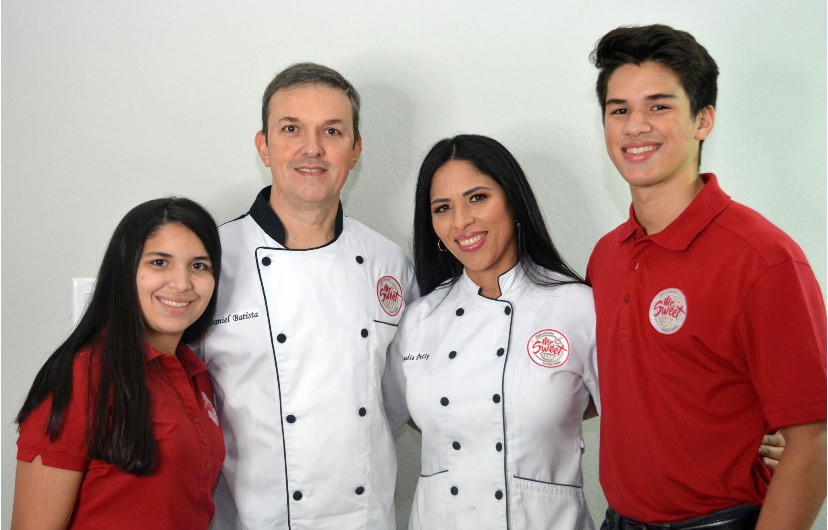 Strong, creative, and determined, Aryelis Ortiz prides herself in making freshly baked pastries. As an entrepreneur, she’s always coming up with ideas and adjusting to new situations – and it’s all starting to pay off.

For more than 20 years, Aryelis and her husband operated Mr. Sweet, a bakery with various locations across Venezuela. However, as the country’s situation deteriorated – including an oil strike that sent the economy tumbling – they were forced to close all but their original location.

Eventually, looking for better opportunities, the couple moved to Houston in 2015 with their daughter and son. Upon arrival, they had one goal in mind; to one day run a family bakery again.

Today, with the help of the BakerRipley Entrepreneur Connection program, mentors, and other local resources, Mr. Sweet USA Bakery and Catering is thriving, even amidst the COVID-19 pandemic.

“When we arrived, we didn’t know anyone, we didn’t even know where to begin. We had a good product, but we needed connections and education,” said Aryelis.

The couple struggled with the language and initially started working in construction.

After telling their managers about Mr. Sweet, they were allowed to cook meals for the construction workers. Aryelis cooked while also fulfilling her administrative duties – the desserts quickly became very popular. This provided some encouragement, and after work, the couple would knock on doors to sell more pastries.

Around this time, Aryelis began using social media and attending networking events for women entrepreneurs. She became part of the Goya cooking club through a connection at an event – preparing recipes and content for more than two years.

Learning how to operate a bakery

After leaving the construction job, she was focused on the family business. Still, parallel to that, she needed to learn about operating a bakery in the U.S.

In turn, Aryelis and her husband got a job at an HEB bakery, where they learned about running a shop in Houston. Quickly climbing positions, she was named Head Cake Decorator.

“We worked part-time while running our business on the side. I would work all night at HEB and then all day in our business, it was rough,”

After an exhausting holiday season, she realized it wasn’t healthy or sustainable and left to solely focus on the business.

While attending a networking event in 2017, she learned about the BakerRipley Entrepreneur Connection program and enrolled in the academy soon after.

“This helped me in a lot of things that I didn’t know. I’ve learned about budgeting and about managing our time of production,”

In addition, the coaches guided Mr. Sweet on showcasing their product and identifying their differentiators.

“This will allow us to sell more products and also have a stand in the Farmers Market,”

Through a program developed to help entrepreneurs in the food industry during this crisis, they will be able to use the kitchen free of charge for two months.

“Before it hit, our business was slowly growing, not at the pace I hoped for,” explained Aryelis.

She admits she was skeptical about the virus at first.

“I went through an oil strike in Venezuela, and we survived that. I didn’t think anything could be worse. Then the stay at home order started, and I was paralyzed for a whole week,”

Aryelis believes in exercising to find inspiration for new ideas. After that one week, she went for a run and came back with a clear path.

“I needed to take action, if some are crying, then I’ll have to sell Kleenex,”

After a family meeting, they came up with a new plan.

“We decided to make an Easter kit for kids, with all materials included and we would deliver them to families so they can have an activity,”

The kits were a huge success.

“This was the sign I was looking for, I knew what I had to do,”

Aryelis started thinking of other kits they could make. With Mother’s Day coming up, she designed a full menu with flowers and wine included. It was such a hit that they didn’t sleep for two days, putting them together.

“It was exhausting, but we cried tears of joy because Mother’s day was always our best day in sales for our bakery in Venezuela. I’d been waiting for this moment for five years.”

As Father’s Day is approaching, Mr. Sweet is offering a surprise breakfast for that occasion and Aryelis is also working on virtual cooking classes for kids.