DACA: I have to continue to fight

After the recent decision, we talked to DACA recipients about growing up, coping with the anxiety, and about their hopes and dreams of one-day becoming American citizens. 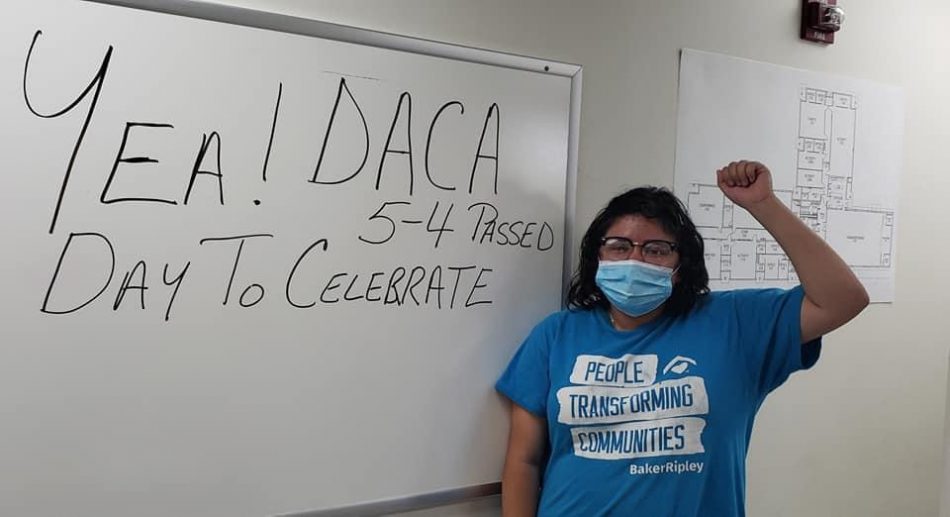 At BakerRipley, we stand with Dreamers and celebrate the decision by the U.S. Supreme Court against the current administration’s efforts to end the Deferred Action for Childhood Arrivals (DACA).

Dreamers live in a constant state of limbo. On any given day, at the stroke of a pen, everything can be taken away. Ending it would be devastating for our communities.

After the recent decision, we talked to Alondra Chavez, a DACA recipient. She talks about living with DACA and about her hopes for immigration reform.

The following is her story, in her own words – edited for clarity.

Alondra Chavez, Program Assistant at Baker Ripley Cleveland Campus. She arrived in California from Mexico in 1999 and shortly after turned two. At the age of nine, she moved to Houston. After High School, unable to go to college after her dad got sick, she started volunteering at a Law firm.

I was expecting to wake-up on Thursday and them saying, you can’t come into work anymore because they took away your permit. It was a huge relief. This has been overwhelming. I wasn’t even aware of the decision until a colleague told me. After that, I went into her office and started crying with happiness.

I’m excited that I can continue to live for two more years without fear, but I know that we need something more permanent.

Growing up, my mom never told me I was undocumented, but I knew. I had just turned 16, and my mom heard about the Dream Act. The next day there was a DACA workshop with BakerRipley and United We Dream.

While at the workshop, this guy stands-up and starts sharing his immigration story. “I’m undocumented and unafraid.” This was the first time I heard someone say that. As he’s telling his story, I’m like – where did you find my diary? That’s literally my story, living in a mixed-status family and being an undocumented student.

After that, I started volunteering with BakerRipley and United We Dream, helping people fill out DACA applications. I did that for two years before I joined BakerRipley.

There are times when I think about my status and how I could be out of a job at any time, and I have breakdowns, it’s a lot! But I have to continue to fight because the day I stop fighting is the day I can essentially be deported.

Dating has been weird. Once people found out I was undocumented, they thought I was with them because I wanted my papers fixed. Also friendship wise, once they found out about my status, they changed. In high school, people didn’t want to be my friends because I went to protests and was undocumented; they saw me as problematic.

I’m coming up on my third renewal. I was set to renew my permit in January, but then COVID-19 hit. We finally got the money together at the beginning of March, but then my partner lost his job and couldn’t afford it. A lot of people didn’t want to renew before this decision, because they might end up losing that money if they take it away.

It’s around $495 -$530 in total with application and mailing fees. But imagine people who don’t know how to fill it, they need to go to an attorney, and that’s another $500. BakerRipley helped me with my first and second DACA renewal applications – both filling it out and financially.

Hopes for the future

I hope there’s an immigration reform that won’t throw people under the bus. Likewise, the reform should open a path to citizenship for a lot more immigrants. Most of the time, when we talk about reform, it focuses on young people going to school. Unfortunately, that’s not the reality of every young immigrant. Some people couldn’t finish school or college; some people came a month too late or had a misdemeanor and weren’t able to apply – that’s unfair.