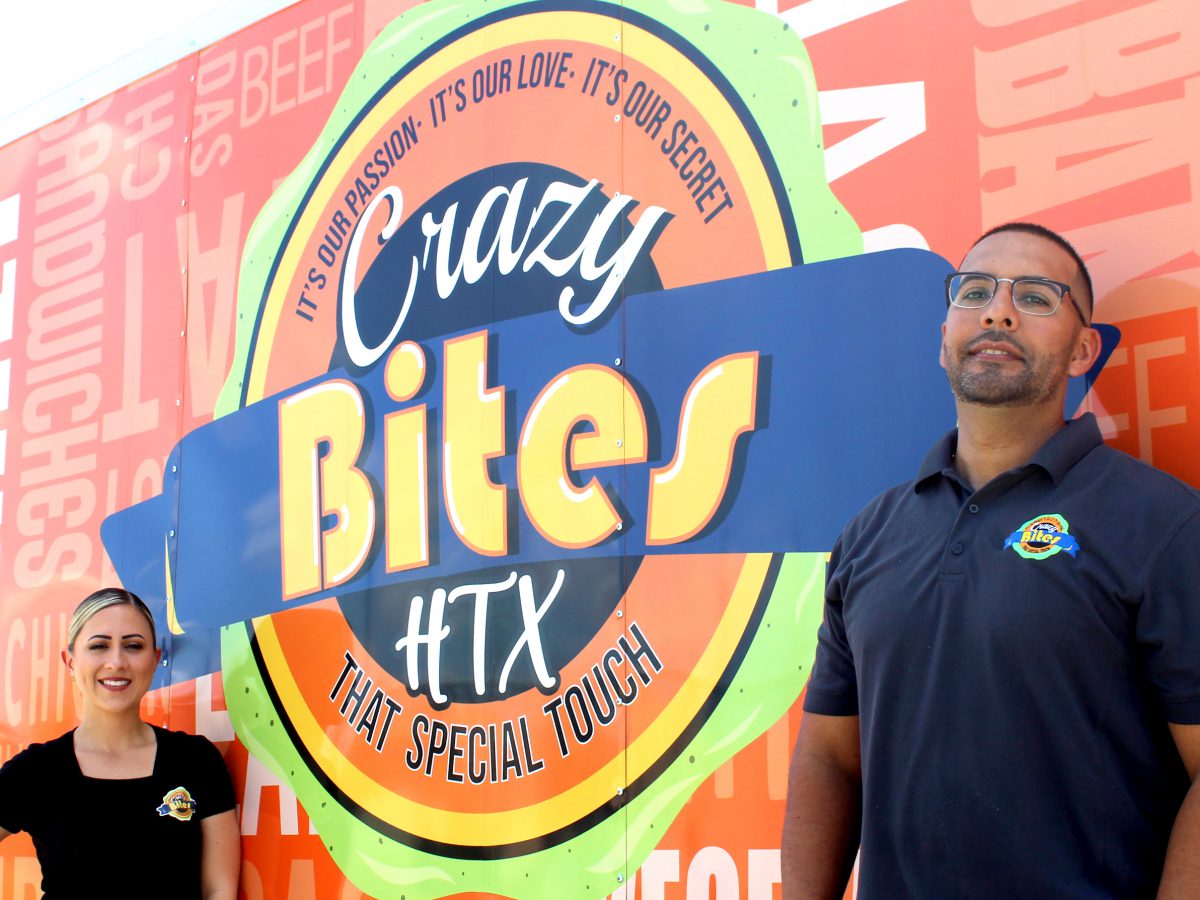 Mauricio always tells people he’s not a chef, but everyone loves his cooking.

“No culinary school,” he says with a shrug and a smile. “I just love food, and I like to experiment with food.”

Mauricio Velasquez and his wife, Diana, own and operate a food truck in Katy called Crazy Bites. If you find yourselves in the area — and you’re up for some Latino-inspired deliciousness — you should go try a few of their amazing empanadas.

But the Velasquez’s love for food didn’t become a career until recently. In fact, their inspiring story wouldn’t have been possible without big dreams, hard work, and many programs and opportunities made possible by BakerRipley employees, volunteers, and donors.

Sitting in their sunlit dining room in Katy, the couple happily tell their story. Mauricio exudes passion as he speaks about all of his recipes, from empanadas to cuban sandwiches to burgers. But his face really lights up when he talks of his favorite, a Colombian soup called sancocho.

“We love soups. Sancocho trifásico … pork, chicken, beef, cilantro, scallions.” Mauricio could talk about ingredients and spices all day, but Diana has a slightly different take.

“Okay, but if we change this,” she says, indicating one of Mauricio’s beloved ingredients, “it will make this meal a little healthier.”

You can see why their relationship works so well.

A FAMILY TRADITION AND A BUSINESS PLAN

Diana and Mauricio love their home in Katy, but before that, they lived in New York. “We wanted to give our daughter a different lifestyle,” says Mauricio. “Moving to Houston was the best decision we have ever made.”

But it was during the time he spent in Colombia as a kid where Mauricio believes he got his love of cooking … from his father.

“My father is a great cook. Growing up in Colombia with him I used to ask ‘how come your food tastes so good?’” Mauricio’s father would say “It’s the love that I put in every dish I make.”

Despite this passion for cooking, Mauricio and Diana haven’t always worked in the food industry. After moving from New York, they found employment at a local trucking company. Diana was the account manager, and Mauricio was the dispatcher. It was dependable work with good income.

But the passion for food slowly evolved into a side hustle. During evenings and weekends, Mauricio loved to cook for his friends. They were so impressed with his abilities that they constantly encouraged him to go to the next level: “Mauricio, you should sell this!”

So the Velasquez’s gave it a shot, making empanadas in their kitchen after work. They would work a full day, commute home, make dinner, help kids with homework, get the kids into bed … and then spend three to four hours in the kitchen making empanadas. They would regularly get to bed around 1:00 a.m., then get up at 5:00 a.m. to do it all over again.

The empanadas would always sell out, but it was exhausting. They simply couldn’t sustain their full-time jobs AND sell home-made food.

Then, COVID-19 struck, and everything changed.

“August 6, 2020, which is my daughter’s birthday, I’ll never forget.” Mauricio’s ready smile slips momentarily, “We both got let go from our jobs. And it was one of the worst days of our lives. We were destroyed. What were we going to do? We didn’t have a backup plan!”

However, the entrepreneurial spirit that Diana and Mauricio had already shown turned their possible tragedy into an opportunity.

Mauricio recalls a conversation he had with Diana at that time. “You know what I said? We’re not going to let anyone do this to us again.”

THE FULL IMPACT OF BAKERRIPLEY

That’s when their food truck dreams were born. That’s also when the Velasquez met BakerRipley.

Like so many entrepreneurs, Diana and Mauricio had big dreams, but didn’t know how to proceed. Through a friend of Diana’s, they were introduced to Nini Gutierrez, a Senior Small Business Coach who manages the coaching component of the Small Business program at BakerRipley. She introduced them to the BakerRipley programs and resources to make a plan for their budding business.

By the fall of 2020, they were enrolled in BakerRipley’s Food Industry Recovery Program (FIRP). Here, they met Victor Acosta, who was a BakerRipley Business Coach. One of the first important lessons they learned was both simple and profound: to change their entrepreneurial mindset.

“They basically reset our brains to stop thinking like employees. We’re business owners. It’s not just cooking … there’s so much more to it.”, says Mauricio Velasquez.

And alongside this mindset shift, the BakerRipley Small Business team equipped them with critical business skills. From developing a viable business plan to projecting costs and revenue, Diana learned how to become the operational engine behind Mauricio’s culinary skills.

But in true BakerRipley style, the opportunities didn’t end there. The Velasquez’s received a holistic, wrap-around approach to successfully launch Crazy Bites.

They learned from Chef Joseph, a BakerRipley partner at the Bite of Hope program with Hope Clinic, who helped them expand their menu, not only offering different flavors of empanadas and sauces but also exploring a vegetarian option. Branding and marketing lessons led to a whole new brand, and the name Crazy Bites was created.

“It was a roller coaster of feelings,” says Diana. “Exciting and scary at the same time.”

From there, Crazy Bites participated in BakerRipley’s Lanzate Houston, where they refined their business pitch and competed for start-up capital. Then they completed BakerRipley’s technical assistance program.

As you can see, we have been honored and excited to walk alongside Mauricio and Diana every step of their entrepreneurial journey. And we’re still standing ready to help Houston entrepreneurs today!

Mauricio encourages every entrepreneur to learn more about BakerRipley opportunities. “Take advantage of the programs,” he says, “Everyone there is always willing to help and teach you.”

He also had something special to say to BakerRipley donors:

“God bless you. Just God bless you. We cannot say ‘thank you’ enough. It changed our lives. Not only ours, but our kids. You made a dream come true.”

We’re proud of Diana and Mauricio, and we’re honored to be a part of the still-unfolding Crazy Bites story.

But here’s the bigger truth: this is a story about more than just Crazy Bites.

Crazy Bites is a Houstonian’s favorite place to grab a tasty bite. It’s a small but key part of what makes Houston such a vibrant, unique home to so many Houstonians. Every small business like Crazy Bites — whether it’s a food truck, or a salon, or anything else — is a thread that knits us together as neighbors.

We partner with neighbors who have dreams, passions, and drive … and we create opportunities for each other in order to create a Houston built on generational impact and fulfilled dreams.

That’s what we do: we build and lift Houston communities!